Violence is a peer-reviewed journal that aims to develop understanding about violence, but also to build up a delineated field of research for preventing and exiting violence, with its contributions and debates. More particularly, the journal is focused on physical, political or social violence, but also deals with State violence, delinquency and crime for instance. When asking crosscutting issues, Violence will look at various regions of the world, from the local to the global. 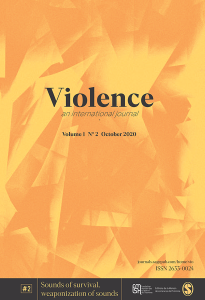 Violence, in all its forms, today constitutes a vast field of research in sociology, and in the social sciences. But the same is not true of preventing and exiting violence, which do not have their own well-structured space within the humanities. Much more empirical than theoretical, understanding of these issues is produced more by actors (NGOs, associations), experts, and practitioners than by social science scholars.

Violence: An international journal endeavors to gather together and support a large community of scholars and practitioners, focusing on two complementary yet distinct scientific and intellectual issues: the analysis of violence, in its diverse manifestations, and preventing and exiting violence.

In doing so, Violence: An international journal aims to develop understanding about violence, but also to build up a delineated field of research for preventing and exiting violence, with its contributions and debates.

Each issue will be composed of a special feature, as well as other articles, debates and interviews on a wider range of topics. Violence: An international journal will also make a special effort to link together research in the social sciences and other fields of knowledge, forging bonds with literary and artistic circles in particular, with contributions dealing with exiting violence through the lens of art.

Violence: An international journal has been created in line with the activities of the International Panel on Exiting Violence.

The journal will be entirely in English and published twice a year by Éditions de la Maison des sciences de l’homme and Sage Publishing.